When we last left Batman and Robin, False Face and Blaze had ambushed them in an abandoned subway station. Now our heroes are stuck to the tracks with some super sticky glue. Oh, and did I mention that a train is speeding toward them? Time is running out…let’s find out what happens in part two…Holy Rat Race.

As the train speeds toward the Caped Crusaders, Alfred is back in the Batcave cleaning the equipment. Suddenly, over the radio the loyal butler hears a strange message: “To the friends of Batman – Many are called but two are chosen. Be receptive.” This somehow inspires Alfred to get on the Bat-radio to contact our heroes. Batman instructs him to destroy the Bat-transmitter. This causes a short circuit which is just enough to free Batman’s hands. He then cuts the rest of the bonds just in time to get out of the path of the train. 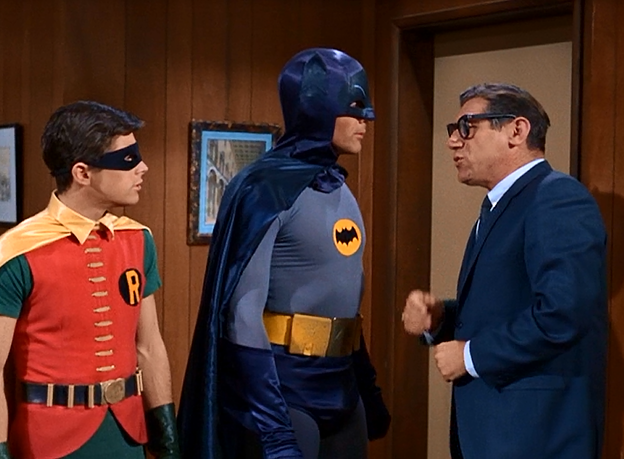 Now, the question is who sent the message over the radio. The Dynamic Duo head to the radio station and question the owner. He reveals that it was a lovely woman who paid for the message. A woman with green hair. She also paid with a check as she said “you can bank on it being false.” Of course, it was Blaze…and the check is a clue that False Face intends to strike at Gotham National. Now remember, the last episode indicated that False Face was planning something involving counterfeit money. It turns out that he plans on stealing the bank’s money and replacing it with bad bills.

When False Face and his men break into the bank vault, they end up finding Batman and Robin waiting for them. They manage to escape however, with some of the masked-villain’s tricks. A chase ensues with False Face leading the heroes into an old movie studio. At one point, False Face gets the jump on our heroes and blows up the Batmobile (leaving just a wire frame). But it turns out that our heroes used a False Face style trick of their own…replacing the Batmobile with an inflatable decoy. The criminal is caught and Blaze ends up in a reform program courtesy of the Wayne Foundation.

Part 1 of this story started in really spectacular fashion, so it’s a bit of a bummer that part 2 is a bit slow to get going. The first half of the episode crawls along as Batman and Robin try to figure out who sent the radio message and then get to the bottom of False Face’s plan. After the commercial break, however, things start to pick up a bit. The second half of the episode is essentially one big bank robbery attempt that then turns into a chase. A really fun element of the chase is that it wanders into a run-down movie studio. It’s kind of brilliant from a budgetary standpoint. I mean, they’re already filming these episodes on a studio backlot. Taking the action into an actual studio backlot just allows them to use locations like a western street or a European courtyard and have it make perfect sense.

My favorite aspect of this episode, though, is how Batman finally manages to pull a fast one on False Face. An inflatable Batmobile, complete with what I must assume are inflatable replicas of Batman and the Boy Wonder. I want to know more about this thing! Is it stored in the trunk of the Batmobile? Or is it small enough that it fits in Batman’s utility belt? Whatever it is it’s both brilliant and completely ridiculous…which pretty much describes this series as a whole. Also wonderful is the way that False Face is finally nabbed by our heroes. He tries posing as Commissioner Gordon, but Batman sees through the disguise because False Face holds his handkerchief in his left hand. “Why is a right-handed commissioner holding his handkerchief in his left hand?” asks Batman.

Now, I promised last time to reveal who plays False Face. Remember, up until the end credits of this episode the actor was only credited as ?. The villain is played by Malachi Throne, a veteran of many films and television programs. In fact, he even performed some voices on future Batman series’ including The New Batman Adventures and Batman Beyond. Though, he’s not as big a star as some Batman villains…like say our villain next week. It’s been a long wait…but get ready for Julie Newmar to make her first appearance as Catwoman in The Purr-fect Crime. Next week, same bat-time, same bat-channel (superhero).