“It’s intresing to me that “preparing” looks a great bit like sitting on your ass. When do we destroy the world already” – Spike

So last week we ended on one of the most memorable cliff hangers of the series with Angel’s curse being lifted as the result of him having sex with Buffy, with the previous episode leaving him to howl into the rain as his soul was removed and he became Angelus once more. Seemingly between episodes it stopped raining despite the scene continuing but here as we get to witness first hand Angel’s evil side as he bites a smoking woman followed by exhaling a long plume of smoke in a pretty nice touch. Needless to say the days of Angel being the brooding love interest for now are clearly over as he this episode establishes him as the big evil for the season as he reunites with Spike and Drusilla.

This episode comes in strong off the previous episode setup with Angel really making up for all the time he’s been lumbered with a soul, while Buffy is left vulnerable as she tries to deal with the fallout of the situation. It’s of course a real bastard moment that Angel gives us as he dismisses taking Buffy’s virginity with a cruel callousness as he implies that it was meaningless to him and that she was nothing but a one night stand to him. It’s a scene which is only made the more powerful due to how believable it is that there are guys who can sleep with someone only to dismiss them the morning after and Angel really plays this angle well, with Joss Wheldon openly admitting that he felt completely creeped out when writing these scenes in the episode, but here it really works and makes the shift in feelings for this character only the more easier. That of course being if you weren’t a teenage boy when the show was airing and hence sick of hearing female Buffy fans swooning over Angel at any mention of the show.

At the same time Angel reforming his alliance with Spike and Drusilla brings an interesting dynamic to their relationship being a sire to both Drusilla and Spike, though here he starts to spark feelings of jealously in Spike as he flirts with Drusilla while he still remains confined to his wheelchair. This of course only develops over the coming episodes but already you can see the sparks starting to fly as Angel and Spike trade barbs and sarcastic comments with their initial happiness at being reunited soon starting to wane.

Meanwhile with the Scoobies they are left feeling rudderless with Buffy still left shell shocked by Angel’s sudden personality shift, leaving them to burry themselves in finding a way to defeat “The Judge” while they take further hits as Buffy finds out about Jenny’s mission to spy on her and Angel while Willow finds out about Xander and Cordellia when she finds them kissing in the library, having seemingly decide to class things up from their usual make out session in the janitor closet.  Rewatching the episode now I still don’t understand why Willow gets so upset over finding out that Xander is with Cordelia, especially when she is supposed to be dating Oz now making even less sense why she would get so worked up over discovering their secret relationship. 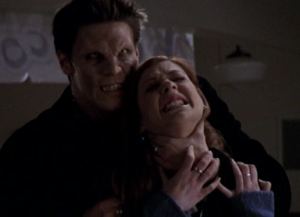 The downside to all this action happening between the two groups is that “The Judge” who had been built up as being this ultimate evil ends up falling by the wayside, even if he gets a suitably awesome demise at the hands of a rocket launcher welding Buffy. On a random side note I was alittle upset that this episode wasn’t a film as I would have loved to have added it to my “Girls With Rockets” list celebrating rocket launcher welding ladies, but more amusingly is the fact that the original script would have seen Buffy using a tank instead of the rocket launcher, only for budget restrictions to require the script to be changed. Still this use of military grade weaponry does serve to give Xander a slightly expanded role in the group than just being the funny guy, as it turns out that when he was turned into a soldier in “Halloween” while being returned to normal when Ethan’s spell was broken he still for some unknown reason still retained all of his military knowledge, which provides a handy excuse for Buffy being able to get hold of a rocket launcher.

A stronger end to the two parter especially after the weaker previous episode.  At the same time it does a great job in setting up Spike, Angel and Drusilla as the seasons big evil, while Buffy choosing to knee Angel in the balls rather than stake him, feels completely believable rather than an excuse to drag out his presence in the season as it might have done with a weaker cast / writer and making it all the less surprising that this episode regularly makes the top 10 episode list, or perhaps we just like the idea of a rocket launcher welding Buffy.