If you recall, when we last left Gotham City, Robin and had been zapped by the Mad Hatter’s hypno ray and Batman had been coated in a thick layer of quick-drying plaster. No one…not even the Caped Crusader could possibly survive this trap. Of course, if he doesn’t then part two of this story is going to be pretty boring. Let’s see what happens in today’s episode, Batman Stands Pat.

As we begin, sculptor Octave Marbot is working to try and chip away the plaster covering around Batman as the Mad Hatter watches. Remember, the Hatter is after Batman’s cowl. He figures that our hero must be dead by now, so there’s no harm in freeing him. Meanwhile, Robin is gagged and tied to a statue of a horse…which is perhaps one of the most bizarrely suggestive images in the history of this show. When Marbot finally cuts away the plaster, everyone is surprised to find Batman still alive! The Mad Hatter and his men flee, trying to steal the Batmobile but failing. Later, Batman explains to Robin how he survived…he simply held his breathe. 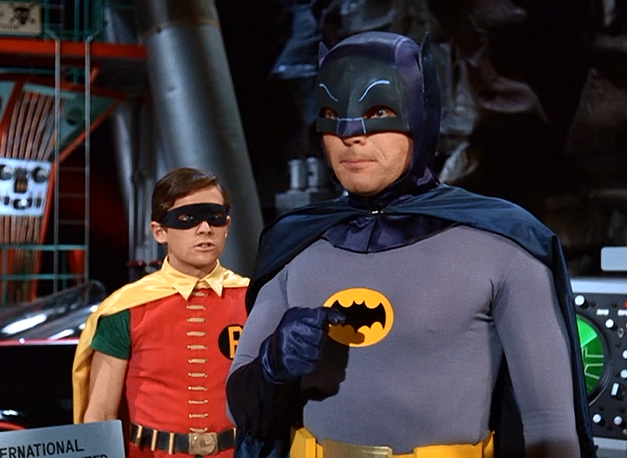 Later, back in the Batcave, Batman figures out that the Mad Hatter is after the twelve jurors who sentenced him to prison years ago. They soon realize that one juror has not yet been captured…Turkey Bowinkle, owner of local bowling alley. Batman decides to send Alfred on ahead to plant a transmitter in Turkey’s bowler hat. Of course, The Mad Hatter shows up and nabs the man…and the hat. However, in the process, he spots the transmitter and sets a trap for the Dynamic Duo. When the heroes arrive at the hat factory, the Mad Hatter’s men get the jump on them. Just as Batman and Robin are about to get sent into the fabric stretching machine, though, they turn the tables and the final fight breaks out. 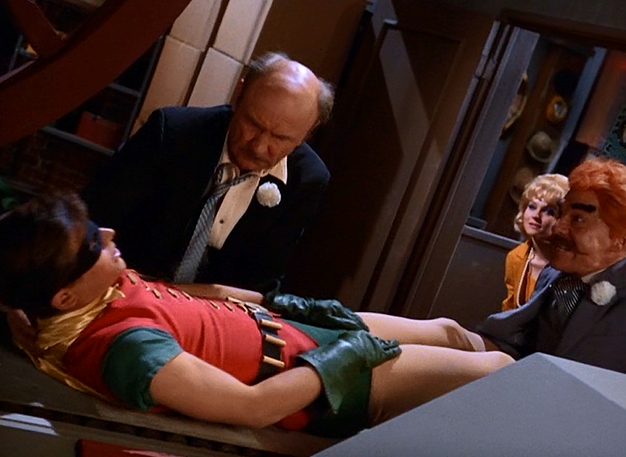 This is a strange little episode. While it has plenty of the sort of fun we expect out of a Batman episode, it is a bit of a letdown after the previous episode. I think part of that may have to do with the fact that the big fabric cutting and stretching device that we were introduced to in the last episode doesn’t really pay off here in part two. Very briefly, Robin gets captured by the villains and is send down the conveyor belt. However, he slides right past the spinning blades, which don’t even come close to grazing him. The stretcher doesn’t do much to harm him either. Granted, the various blades on this machine look like their made of cardboard…however, they could’ve at least tried to create a dangerous situation! 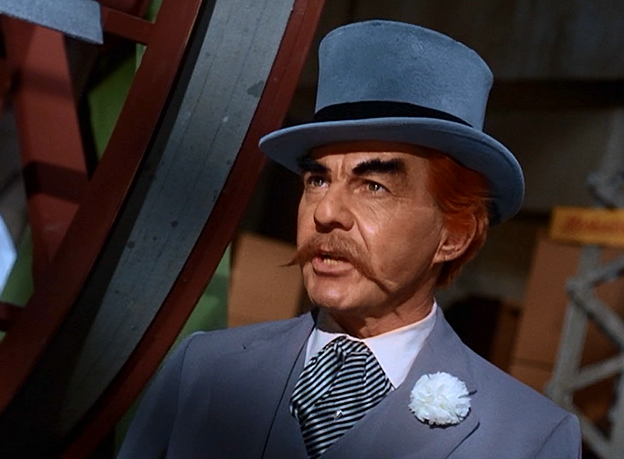 In our last episode, we also got a much more colorful take on the Mad Hatter from David Wayne. This time around he just doesn’t make as much of an impression. It felt like his screen time was quite a bit less in this episode, and we don’t get nearly as many uses of those weird hypno eyes popping out of his top hat. In fact, at one moment they even conveniently malfunction so he has no choice but to flee our heroes.

One bright spot in this episode is that Alfred finally gets a chance to get out into the field and assist the Caped Crusaders. He poses as a guy obsessed with genealogy as he tries to gain access to Turkey Bowinkle’s bowler hat so he can plant the transmitter. It’s a goofy little sequence that is quite fun. Ultimately, though, the two half of the series’ first Mad Hatter story are a bit uneven…with part one working far better than part two.

Next time we see the return of Batman’s most famous arch enemy, the Joker, in The Joker Goes to School. See you then, same bat time, same bat channel (superhero).