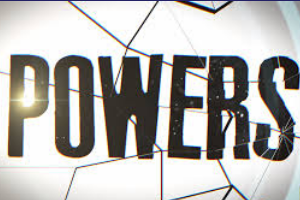 Now that the entire first season of Powers is in the can, let’s step back a bit and take a broader look at the show. I started out hopeful and ended up drinking heavily while hating my continued existence, so obviously I’m going to draw a negative conclusion here (spoiler warning, I guess?) but it’s worth taking a look at WHY the show fell apart. With any luck, Sony will fix it up for season two. Because there is going to be a season two, apparently. Setting fire to a briefcase of unmarked bills would be a better use of the money, but there you go.

I’m going to start with what didn’t work and end with what DID work, so we can at least go out on a semi-positive note. So let’s frontload the worst of the complaining, shall we?

Unlikable and/or Uninteresting Protagonists on Parade

A super hero show is defined by its, well, super heroes. And in this case, they were a complete mess. Christian was at times petulant and whiny (“Waaah, I want my powers back”) and at other times manipulative and deceptive. Very, very rarely did he show signs of being an intelligent and compassionate individual… most of the time he was entirely focused on his own goals and his own fixations. Yes, yes, flawed heroes are cool heroes, but this guy was a Denny’s Grand Slam worth of flaws with very little heroism to go on top of it all.

Deena was completely useless. She had the potential to be our entry point into this strange new world, but oscillated between being a hopeless fangirl, a clueless newbie, a wet blanket, a killjoy, or the only sane person in the room whom nobody listens to. At any given point the writers made her whatever they happened to need in order to foil the current situation, leaving her looking stupid or ineffective. The show could’ve easily been written without her being there at all, if not for the need to have someone for Christian to talk to.

Retro Girl… well, she was the flagship character for the whole “heroes are celebrities” motif. So let’s talk about that, shall we?

Hollywood has a serious navel gazing fixation on hyping up its own legends, even when using legends by proxy. I’m sick and tired of shows set in Los Angeles, plagued with spoiled rich celebs and their spoiled rich corrupt lifestyles. The culture of worshiping idols and scrutinizing them under the TMZ media microscope is aggressively stupid and exists only to pump money into a thing that exists only to pump money into itself. It’s boring, it’s tired, it’s cliche… and sadly that’s exactly the metaphor they picked for Powers.

I don’t care about Zora’s running shoe deal. I don’t care about idiot publicists violating all common sense by hiring villains to attack heroes. I don’t care about Retro Girl’s social media sway; “real power” is not your Twitter follower count. I’m sick of it all and… well, that’s probably one of the reasons why I was the wrong guy to watch this show, because I came into it with utter contempt for Hollywood’s perpetual self-importance in the first place. Draping THAT cloth on top of a superhero’s shoulders does not endear that superhero to me.

Lastly, we’ve got Crispin and Calista and, I can’t believe I have to write these words again, “Chaotic Chick.” (Yes, it’s Chaotic Chick, not Kaotic Khic. We are not in the 90s anymore.) A miserable attempt to bring in the youth demographic, these three swirled and bumped into each other and generally went absolutely nowhere fast, constantly breaking up and making up and having sex and giggling at each other until I wanted to dig a scalpel into my eye sockets.

I’d like to think I’m not a boring old fuddy duddy. Teenage me would’ve hated this storyline just as much as older me. It’s pandering of the most obvious sort, it’s wholly uninteresting, and other than setting up a highly questionable plot arc for season two it accomplishes nothing at all. Speaking of which…

Okay, now that all the ugly is out of the way, let’s talk about the good.

Villains on this show were excellent. Some of the mechanical / metaphysical bits about how Wolfe’s powers worked were clumsy as hell, sure, but you can’t deny Eddie Izzard played the hell out of that role. Every minute of screen time he got was delicious and the writers generally knew how to write his dialogue well.

Similarly, Johnny’s part was excellent, a grey-area villain/hero who has the best intentions but not the best methods… and unlike other anti-villains, when things go south, he owns up to it and takes responsibility rather than passing the blame. HE’S the real hero of this show, not that louse Christian, and his acting is flawless in that regard.

It’s not a good thing when your villains are infinitely more sympathetic and human than your heroes, but there you go. Some damn good villains here, and almost worth watching the show just for them. Hopefully they’ll push Johnny hard in season two, realizing what a gem they’ve found.

While they didn’t fully pay off on this, the base concept of the show is great. I’ve wanted to see a superhero-focused world through the eyes of the police force for some time, and since Gotham sure as hell ain’t giving me that, this is as close as we’re going to get. There’s vast, untapped potential for the setting going into season two, and if the writers are aware of what they have here, they’ll be able to explore it without being shackled down to the boring plots of season one.

Granted, “untapped potential” is not a particularly huge praise to offer. It means you didn’t tap dat potential. Never leave potential untapped, it may go stale.

Powers failed. It had good ideas in its DNA, some great setups and great concepts to play with, but was too fixated on all the wrong things and ended up going nowhere fast as a result. Hopefully Sony can improve going into the next season, but I have my doubts about that. Time will tell, but don’t say you weren’t warned.

Thankfully, Powers also comes with a Playstation Plus subscription, and I’ve got a lot of sweet free games out of the deal. So. There’s that.