There wasn’t quite as much happening this week, as last week’s events were absorbed and next week’s finale was set up. Deanna and her family mourn the loss of Aiden, on the heels of Father Gabriel’s warning. Deanna also interviews Nicholas about what transpired on the ill-fated run, but he lies, as we all knew he would, to make himself look like a defeated hero and the others traitors, while Glenn tells Rick what really happened. Michonne and Rosita track down Sasha, who’s running through Alexandria’s surrounding woods hunting down Walkers. Daryl and Aaron are out at night and see a light in the distance, but find disturbing signs including severed body parts near the place the next day. Carl and Enid, another new Alexandria recruit, frolic through the woods together, being angsty teenagers. And, finally, things escalate when Rick attacks Pete over beating Jessie, which Deanna has known about but ignored because Pete is Alexandria’s only doctor.

I’m hoping something becomes of all the focus on Sasha’s grief. It’s not that she doesn’t have a right to freak out, but right now it feels like filler that’s aimlessly wandering. It’s certainly given us some great scenes between her and Michonne, neither of whom I can recall having shared a conversation before episode 10 of this season, but I’m hoping for a bigger payoff in the end.

Speaking of payoffs: MORGAN? Where is he? Post-credit teasers of him in the season premiere and mid-season finale, but nothing else so far. Could he be the mystery person mutilating bodies? I have to believe he’ll pop back up before the end of the finale. The question is, will he be a friend or foe to the Group?

I’m thinking the confrontation between Glenn and Liar Liar Pants on Fire Nicholas will lead to some sort of Walker invasion, at the hands of the latter. It’ll probably be by accident, because Nicholas doesn’t seem smart enough to do something like that on purpose. But Alexandria will fall, probably only partially for now, but things will shift greatly. 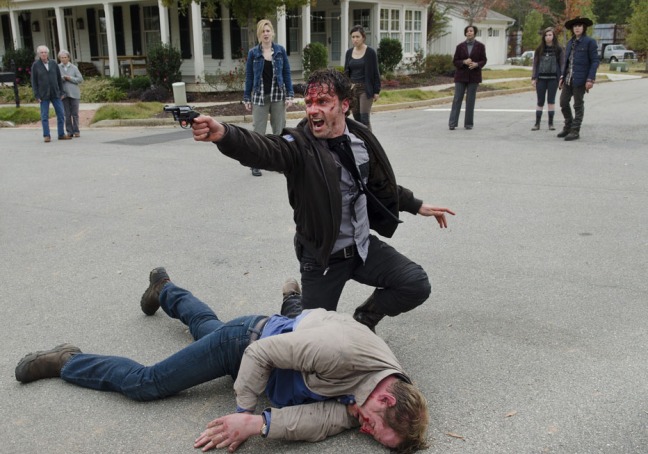 As for Baby Shane…I mean Rick…I’m angry. Rick was our hero, and despite everything he’s had to do in the past, good and bad, he’s throwing it all away on a woman he’s known for five minutes, simply because she’s a pretty damsel in distress. The writers pushed this story line too quickly and with poor execution. Rick is now a joke and has a long uphill battle to get back in my good graces. The Alexandria chapter could have been a great one, but this love triangle/abusive spouse subplot has turned into an unbearable soap opera. The sooner we can move away from it, the better, so I pray for far more intriguing 90 minutes next week. This season started off on a high note and should end that way.

Finale Death Prediction(s): Judith. She survived the fall of the prison (unlike in the comic), but her number might be up with the fall of Alexandria. I hope I’m very wrong, and I’m not great at predicting deaths, so hopefully I am. However, the death toll has been scary high this year, and Norman Reedus stated in an interview earlier this month that the finale will be very emotional. Judith’s death is the only one I can see making viewers emotional at this point, because I think the long-running characters are safe for now…except maybe Glenn.